A funny, unexpected and insightful documentary exploring humour in Mennonite culture!  Comedian Matt Falk digs down into his Mennonite past to discover his heritage is/embraces hilarity and must include more into his comedy act.

Written and Directed by Orlando Braun
Produced by Jorge Requena

“explodes the humourless image of Mennonites”

“the documentary will no doubt leave viewers wanting more”

“That Mennonite Joke is both a lighthearted investigation of a people’s brand of humour and a revealing look at an unexpectedly vibrant culture.” 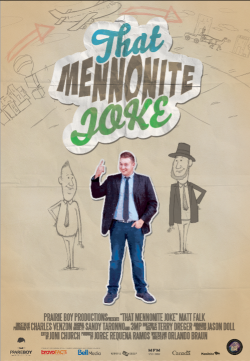 What is a Mennonite? A stiff, humorless, efficient farmer who prefers to live without electricity. At least that’s the stereotype. But Mennonites are also funny. No seriously, like really funny. Spread out across the country is a surprisingly large group of Mennonites, who specialize and capitalize on humor and who don’t ride horse and buggy.

What most people don’t know is: Mennonite’s bizarre native language, Plautdietsch is inherently funny and their culture is filled with jokes and laughter. So, what is at the root of all this humor? What is the barrier between North American culture and Mennonite culture? Is comedy strictly cultural? Do Manitoba Mennonites only laugh to keep warm? All these questions will be answered.

Matt Falk is a comedian from Niverville Manitoba… yeah it’s close to Winnipeg. His act is an offbeat concoction of self-deprecating humor and boyish charm. Matt is on a quest to craft the most hilarious act in history and to do that, he must go on a comedic walkabout through his heritage.

This journey will lead us through encountering other Mennonite entertainers like 3MolPlaut (A comedic Mennonite Trio with 4 albums, sung entirely in low-german), Corny Rempel (Menno radio host by day, world class Elvis tribute artist by night). He’ll talk to authors like Nathan Dueck, Armin Wiebe (Award-winning Author of The Salvation of Yasch Siemens), and Miriam Toews (Governor General Award recipient and multi-award winner) who have explored this unique humor in their books.

Beneath the droll flatlands of the Manitoba prairies lies a treasure trove of humor and culture, and Matt will attempt to uncover it. In doing so, can he finally bridge the gap between Mennos and Non-Mennos? Join Matt as he attempts to unlock the secret world of Mennonite humor.

“The problem with being a Mennonite is that there’s no good pick-up lines. The only good Menno pick-up line is: Hey, you look like a lady who knows how to play Uno.”
—Matt Falk 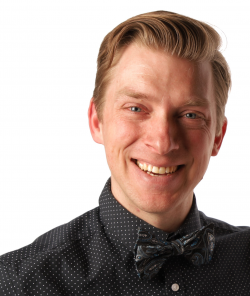 This is Orlando’s directorial debut. That’s right – his first documentary as a director!  As a producer, he’s an award winning filmmaker of short films [drama and documentary] that have screened at numerous festivals and garnered accolades.  He has also worked on award-winning TV documentaries, feature films and TV series in various capacities from Production Assistant to Business Affairs and Production Management. Orlando received his Bachelor of Arts in Film at the University of Manitoba and a Masters of Fine Arts in Producing from the New York Film Academy in Universal Studios, California. Orlando is serious about making movies and serious about having fun making them!

This is Jorge’s debut as a producer!  As a director, his last film Graffiti Stories won the award of excellence at the Canada International Film Festival and continues being accepted into film festivals internationally along with many of his other short films – he has directed 16 short films and over a dozen music videos!  Jorge has also worked on the biggest Hollywood productions to the smallest indie films over the past 10 years in various capacities including Assistant Directing, and in 2008 directed his first feature documentary Frostbite for broadcast television. Originally from Mexico, Jorge now makes Winnipeg his home where his creativity has found terrific inspiration! 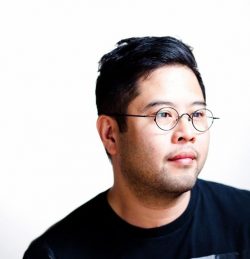 Born in Winnipeg, Charles is a first generation Filipino that grew up in the North End. He is a Canadian artist based in Winnipeg. He got his first break into the film industry working with Noam Gonnick on Stryker acting as a type cast Asian gangster. He continued to work in the film industry for another 8 years in the camera department. He apprenticed with Roger Deakins on The Assassination of Jesse James, he was a camera operator on Guy Maddin’s My Winnipeg and he was chosen to be the 2nd unit cinematographer for Paula Kelly on her feature film Euphoria.

More recently, he has shown a few photographs from his family portrait series called Things Fell Apart at Maison Des Artistes (2014) and a few short films he has directed and produced at the Winnipeg Underground Film Festival (2014). He was the cinematographer for Heidi Phillips on her film Old West Lodge which recently won for Best Prairie Film at WNDX 2015.

Matt Falk was called “Effortlessly Funny” by the CBC. He’s performed at Just For Laughs and the Winnipeg Comedy Festival. His album; Apple Pie & Scars reached #1 on the iTunes Comedy Charts. It is currently being played on Sirius XM Canada/USA and was named one of the Top Ten Comedy Albums the year of its release. He’s worked with the likes of Brent Butt, Ron James, Gerry Dee and many more. Matt is one of the writers and stars of RocKids TV and the writer of the record breaking Celebrations/Jubilations Dinner Theatre show; ‘The Big BOOM Theory’ and ‘It’s Elementary Sherlock’. His clean stand-up comedy act has gained him many accolades including placing 2nd in The World Series of Comedy in Las Vegas.

FUNDING FOR THIS PROGRAM PROVIDED BY: